As a veterinarian who works for an animal nutrition company, I frequently have the opportunity to interact with customers who have questions about health issues that may be nutritionally related. I frequently hear from horse owners whose horse has developed white spots on their face, usually around the muzzle and/or eyes. The conversation typically goes something like this: “My horse suddenly developed white spots on his muzzle and around his eyes. I read on the internet how this was called vitiligo or leukoderma and is caused by a deficiency of vitamin A (or copper or zinc or iron or vitamin D or….). How could this be since he is on Strategy® horse feed and excellent pasture, and I know he is getting all the vitamins and minerals he needs? I tried to find more information about this online, but couldn’t find much that was very scientific. When I asked my vet, she told me that it was a cosmetic problem that won’t affect his overall health and that not much is known about what causes it or how to treat it. I’m confused, and don’t know what to believe or what I can do about it. Can you help me?”
The confusion is understandable. There are at least two distinct conditions which result in virtually identical outward clinical appearance: depigmentation (loss of color) of pigmented bare (no hair cover) skin. As a result, there is a great deal of uncertainty about which term should be applied and what the inciting cause of the depigmentation may be. Therefore the terms “leukoderma” and “vitiligo” are often used interchangeably, even though leukoderma and vitiligo are definitely not the same. And misinformation propagated on the Internet further muddies the waters.
First, let’s address the confusing terminology. Leukoderma literally means white skin. In medicine, the term is applied to any condition that manifests as depigmented areas of skin that should be pigmented or were previously pigmented. The term is nonspecific as to the cause of the depigmentation (which may be multifactorial). In horses, leukoderma is generally confined to the face and tends to wax and wane. Vitiligo, on the other hand, is the term applied to a more clearly defined complex autoimmune disorder that affects many species, including humans, dogs, cats and horses.
In horses, vitiligo generally results in depigmentation lesions in all the areas of the body with exposed skin (muzzle, around the eyes, sheath area (if male) and perineum) and generally does not resolve once present. No additional clinical signs or long-term health effects have been reported in horses with vitiligo. A study published in 1986 on dogs, cats and horses with vitiligo found that these animals had antibodies against pigmented cells in the skin which strongly suggested that vitiligo in these species is indeed an autoimmune disorder just as it is in humans.1  Further research in horses revealed a probable genetic susceptibility to vitiligo that was linked to the dominant gray coat color gene found in several breeds (Lipizzaners, Andalusions, Arabians). Specifically, these studies showed a high incidence of vitiligo in these breeds and that horses that turned gray earlier in life were even more likely to manifest vitiligo.2, 3 It is also strongly suspected that vitiligo may be a component of Arabian Fading Syndrome /pinky Arabian syndrome, which affects not only Arabians but also Clydesdales and Welsh Ponies (two other breeds commonly affected by skin depigmentation). 4 Appaloosa horses also have a genetic predisposition to vitiligo; however, in this breed, the skin condition is considered favorable because it contributes to the overall “splash” of the horse.5

Many horses of other breeds (Quarter Horse, Thoroughbred, Paints, etc.) and colors (bay, sorrel, chestnut) develop depigmentation which is usually confined to the face. In horses that are not genetically predisposed (due to breed and coat color) to developing the specific autoimmune disorder vitiligo, the depigmentation condition is more appropriately classified as leukoderma. There are many possible inciting causes for leukoderma, such as sun damage, contact irritations of the skin, infection and stress which may occur at some time distant from when the depigmentation manifests making it difficult to attribute a direct cause and effect; which further adds to the confusion about depigmentation conditions. It is unclear at this point whether leukoderma may also have an autoimmune component or whether the depigmentation occurs as a result of direct damage to the pigmented cells. A similar appearing condition is “bird catcher’s spots” or leukotrichia in which defined round areas of the horses coat turn white for no apparent reason. It is currently unknown as to whether leukotrichia is a related condition to either leukoderma or vitiligo. 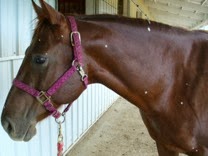 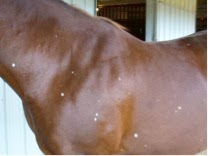 Photos by Kathy Williamson, DVM
Clear as mud, right?!!
So now, back to the original question from the horse owner: What role does nutrition play in the development or treatment of depigmentation? Deficiencies of several different nutrients have been purported to result in vitiligo, leukoderma and leukotrichia but no direct cause and effect has been established. Vitamin A and copper are the two nutrients most commonly implicated. However, deficiencies of zinc, vitamin E and iron have also been blamed. In horses with a genetic susceptibility to vitiligo, nutritional deficiencies may induce or exacerbate pigment loss. One case report published in 2008 reported on a single Quarter Horse filly that responded favorably to a nutritional supplement containing high levels of vitamins A and D. The author concluded that the filly responded favorably because she was deficient in one or more of the nutrients provided in the supplement.  Unfortunately, no information was provided in the case report about the diet of this filly to support the conclusion that she truly had a nutritional deficiency that was corrected through supplement administration.6 Other anecdotal reports exist of horses responding favorably to additional vitamin A and copper supplementation at levels well above those needed to meet nutritional requirements. But the published and anecdotal reports of treatment successes with nutritional supplementation provide little guidance in determining exactly which nutrients should be supplemented for which depigmentation condition and at what dosage they should be administered. So it seems that certain horses may respond favorably to supplementation while others may not, and still others may appear to respond but the issue can reoccur in the future.
In general, it is important to know that both leukoderma and vitiligo appear to be largely cosmetic issues that do not affect the overall health or performance of the horse, and that in many cases, the issue may resolve spontaneously over time. It is unknown whether nutritional supplementation over and above nutritional requirements is beneficial, but it should be noted that over-supplementation of certain nutrients such as vitamin A may lead to toxicity. Always discuss the use of nutritional supplements with your veterinarian prior to starting your horse on them.
1. Naughton G, Mahaffey M, Bystryn J. Antibodies to Surface Antigens of Pigmented Cells in Animals with Vitiligo.  Exp Biol Med. March 1986; 181 (3) 423–426
2. Sölkner J, et al. Genetic relationships between speed of greying, melanoma and vitiligo prevalence in grey horses. 52th Annual Meeting of the European Association for Animal Production (EAAP). 2004.
3. Erf, Gisela F. Animal Models. Vitiligo. Springer Berlin Heidelberg; 2010: 205–218.
4. Young A, White S, Bannasvch D. 10 Genomics of skin disorders. Equine Genomics (2013): 155.
5. Thomsett L. Pigmentation and pigmentary disorders of the equine skin. Equine Veterinary Education 3.3 (1991): 130-135.
6.Montes L, et al. Vitiligo in a Quarter Horse Filly: Clinicopathologic, Ultrastructural, and Nutritional Study. Journal of Equine Veterinary Science. 28.3 (2008): 171–175.


- Common Causes Of Poor Body Condition And Performance
The first step in determining why your horse is not eating well, losing weight or failing to thrive is to examine his nutritional program. Your Purina Certified Expert Dealer or Sales Specialist can help you with this process. Careful assessment of your...

- The Role Of Antioxidants
Antioxidants such as vitamin E are beneficial, but how much does your horse actually need? We know antioxidants are important for health, but few people really know what they are or what they do. Simply put, antioxidants fight free radicals. So what...

- Efficacy Of Yeast Products In Equine Diets
In the past several years, multiple sources have recommended yeast products for inclusion in equine diets for many purposes, including improving fiber and phosphorus digestibility, increase feed efficiency, support hindgut bacteria, and even prevention...

- Ration Balancers - What Are They And How Do I Use Them?
You may have heard the term “ration balancer” before, but do you know what it means and how to use it in a feeding program? Even though I’d been around horses most of my life, I had never heard the term until I was in graduate school. Ration balancers...

- Is It Allergy Season?
I've always thought of spring as allergy season but I've been hit hard with some type of allergy reaction over the past couple weeks; sinus headaches, runny nose, etc. Just miserable. I've also gotten an increase in the phone calls and e-mails...